This week I had a column published in the AFR in which I noted that what is missing in Australia's start-up funding marketplace is risk takers, the lack of risk takers then results in some of the best opportunities looking elsewhere, and thus the return for start-up investing is low.

The AFR also reported on a debate on innovation at The Australian Financial Review/Crawford Australian Leadership Forum in Canberra. In a different take on the financing issue former institutional investor Doug McTaggart told the forum that there was plenty of money available for innovative business ideas, "But we have a huge gap in term of capable experienced personnel who can take an idea from the cradle to the early stages of commercialisation. The US has them in spades."

These "capable experienced personnel" seem to be the magic missing ingredient. Perhaps McTaggart and I are both right - but the important missing part of the skill set of the personnel we bring to the task of taking ideas to commercialisation is the willingness to fail.

The importance of embracing failure had featured in another AFR column reporting on research by Experian. Experian Australia & New Zealand managing director John Merakovsky said, "The key thing, which was pleasantly surprising in the research, is the emergence of, particularly in the progressives, of some acceptance and tolerance of failure. The idea of one big strategy without getting market feedback and getting it right is extremely risky, but being able to go down this path, try things, fail, try things, win, is really important."

The importance of being prepared to fail isn't new in management literature. It was one of the concepts promoted by Peters and Waterman in In Search of Excellence, and captured in the phrase "Ready, Fire, Aim!" 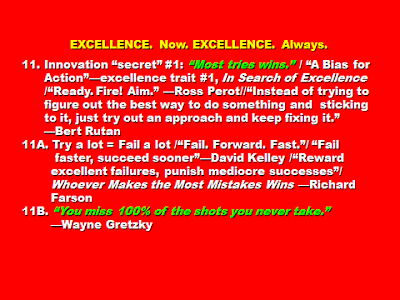 At the same Leadership Forum, former IBM Australia CEO Andrew Stevens said "I don't think we have a disruptor mindset" and that as a nation we need to understand this as an issue about jobs "This issue of future jobs for our young people…is one of the central issues for our generation...automation and autonomous systems will have an impact." CISCO's Irving Tan (predictably) said the next wave of digitisation would involve the industrialisation of the internet caused by connecting robots and sensors.

And maybe between these two we might also find our path to experimentation and failure. Disruption isn't a goal directed activity solved by deductive reasoning, it is a creative task that uses skills in "lateral thinking." You learn by doing. As Gretzky says you miss 100% of the shots at goal you never take. But also, to get better at shooting goals you take lots of shots at goal (and OTHER training).

Elsewhere former chief futurist at CISCO Dave Evans wrote "Here's what policymakers need to understand: Each individual device hooked up to the Internet is a kind of experiment, and any given product might succeed or fail. But in aggregate, this is an advance so large it's hard to grasp as a single thing."

Finally though we have to confront the question of whether there is a problem, more specifically does digital disruption really create growth and jobs. That was the question the AFR's Jennifer Hewitt posed after this year's Leadership Forum.  Hewitt at least believed that we should give it a go, concluding "And although it's true no one can predict the relative significance of the internet compared with say, electricity, it seems reasonable to take out a form of national insurance policy."

But interestingly that question featured at last year's forum and I answered it almost a year ago in the pages of the AFR. In brief, the digital revolution is only one of the factors influencing our growth rate; its impact is masked by factors pulling growth down, especially growing inequality.

One of the themes of my writing here and elsewhere is "what can Government do to drive Australia in benefiting as a digital economy." But often the question is also "what can industry do."

A separate item in the AFR this week got me very angry. Under the heading "Research students must be trained for jobs in industry" the executive director of the Australian Technology Network makes a case for the  Industry Doctoral Training Centre in Mathematics and Statistics model. It teams each PhD student with an industry partner to work on an industry problem applying mathematics and statistics. We are told that students also receive course work in technical and business skills such as leadership, communication, project management and commercialisation. The national student group also gets brought together regularly for conferences and networking events.

This is all very interesting, but the piece is otherwise confused. On one hand industry employs only a third of Australia's researchers, but we are told the PhD program doesn't train researchers for jobs in industry where "many of them will be employed." I get particularly annoyed when the article cites the Global Innovation Index and Australia's "innovation efficiency rank" of 81st as some kind of validation that the "problem" is all about not having researchers "industry ready." My anger is two-fold.

Firstly because the GII is a piece of unscientific gobbledygook (this is true of almost all published Indices - see this discussion that refers to the ITU ICT Development Index). It's starting premise is that the number of patents is the important output. It correlates the index to GDP/capita but never attempts a correlation to growth. The former correlation is to be expected - rich countries spend more on inputs like education, the causal flow is from wealth to investment in innovation. The valuable question is to devise an innovation index that has predictive power on growth!

Secondly because it makes the huge assumption that industry doesn't employ researchers because they are not "industry ready". The reality is that industry simply has no interest in research in Australia, but thinks it does. The latter point comes from the difference between Australian businesses self-assessment of university research collaboration as measured by the WEF Global Competitiveness Index and the data provided by the OECD (see note below).

Industry is forever banging on about students from first degrees not being "job ready", this pitch about research degrees is just another variant. What we need is a national conversation about the difference between education and training. The former prepares the individual by providing base level knowledge and skills ready to be trained. Medical practitioners provide the best model - the degree provides the foundation, two years in hospitals followed by specialist (including GP) "training" creates the skilled practitioner. But that is only the start of a career that demands life-long learning.

So - the gaps in our system - a lack of risk takers and managers who know how to fail fast, a jaundiced view of ICT, and industry that has a mistaken belief about its own participation in research and training.

Note:
Australia is rated last in the OECD for firms collaborating on innovation with higher education or public research institutions both SME and large firms. The World Economic Forum Global Competitiveness Index (I have used the 2014-15 report) includes as one of its indicators of "innovation" (12.04) "University-industry collaboration on R&D" which is derived from a survey question "In your country, to what extent do business and universities collaborate on research and development (R&D)? [1 = do not collaborate at all; 7 = collaborate extensively] |
2012–13 weighted average".  To derive a single rank for the OECD the expenditure in the OECD data is weighted 70% to large firms and 30% to small as this weighting generated the highest correlation between the two ranks. Australia is ranked 33 out of 33 on the OECD data but its managers rank itself 15th in the OECD. (Note the OECD data is collaboration expenditure as a percentage of product i.e. revenue) 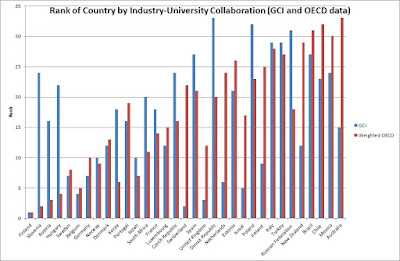 Posted by David Havyatt at 7:09 PM